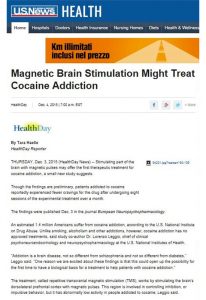 he brain with magnetic pulses may offer the first therapeutic treatment for cocaine addiction, a small new study suggests.

The treatment, called repetitive transcranial magnetic stimulation (rTMS), works by stimulating the brain’s dorsolateral prefrontal cortex with magnetic pulses. This region is involved in controlling inhibition, or impulsive behavior, but it has abnormally low activity in people addicted to cocaine.

The current study involved 32 longtime users seeking treatment for cocaine addiction. For one month, half the patients received various medications to treat depression, anxiety and sleep problems — all symptoms related to cocaine addiction. The other half received 13 minutes of transcranial magnetic stimulation once a day for five days and then once a week for three more weeks.

After one month, 69% of those receiving brain stimulation had not used cocaine (no positive drug tests), compared to 19 % of those in the comparison group. The stimulation group also reported less craving for cocaine than those not receiving it, the study found.

“It underlies the fact that cocaine addiction and addiction as a whole is a biological process and not just people of weak character. Addiction is considered a brain disease because these drugs actually change the brain — change the structure and how the brain works — and these changes can be long-lasting.”