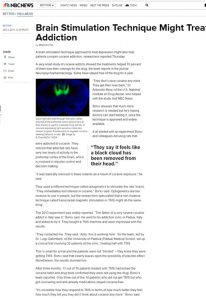 A brain stimulation technique approved to treat depression might also help patients conquer cocaine addiction. A study of cocaine addicts showed the treatments helped 70 percent of them lose their cravings for the drug, the team reports in the journal Neuropsychopharmacology. Some have stayed free of the drug for a year.

It all started with an experiment Bonci and colleagues did using rats that were addicted to cocaine. They noticed that addicted rats have very low levels of activity in the prefrontal cortex of the brain, which is involved in impulse control and decision making.

They used a technique called optogenetics to stimulate the rats’ brains. “They immediately lost interest in cocaine,” Bonci said. Optogenetics are too invasive to use in people, but the researchers speculated that a non-invasive technique called transcranial magnetic stimulation or TMS might do the same thing.

So the team, led by Dr. Luigi Gallimberti, of the University of Padova (Padua) Medical School, set up a clinical trial involving 32 patients at the clinic, treating half with TMS.

This is small for a trial and the patients were not “blinded” – they knew they were getting TMS. Bonci said that clearly leaves open the possibility of placebo effect. Nonetheless, the results stunned him.After three months, 11 out of 16 patients treated with TMS had kicked the cocaine habit and drug tests confirmed they were not using the drug, Bonci’s team reported. Only three out of the 16 patients who did not get TMS but who got counseling and anti-anxiety medications stayed cocaine-free.

“It’s incredible how they respond to TMS in terms of how much better they feel, how much they tell you they don’t think about cocaine any more,” Bonci said. “They say it feels like a black cloud has been removed from their head.”

He’s followed many informally for a year now. It’s not a scientific result, but Bonci said the effects may be long-term. “The majority of these patients are still completely cocaine-free,” he said.