Massachusetts Institute of Technology – For Cocaine Addicts, Treatment with Magnets May Stop Craving

Massachusetts Institute of Technology – For Cocaine Addicts, Treatment with Magnets May Stop Craving 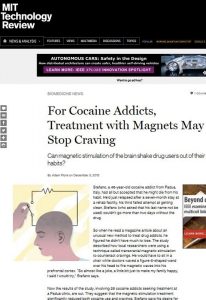 Stefano, a 46-year-old cocaine addict from Padua, Italy, had all but accepted that he might die from his habit. He couldn’t go more than two days without the drug.So when he read a study described how local researchers were using a technique called TMS to counteract cravings, he figured he didn’t have much to lose.

Now the results of the study are out. They suggest that the TMS significantly reduced both cocaine use and cravings. Stefano says his desire for cocaine diminished dramatically after several sessions under the magnet. “I can’t explain it,” he says. “It happened very quickly.”

The findings, presented in the European journal Neuropsychopharmacology today by Luigi Gallimberti, a doctor at the University of Padova Medical School, and Alberto Terraneo, a physician who treats addicts, are generating optimism among addiction researchers, because there are no effective drug treatments available for cocaine addicts.

It’s a “first step toward opening a neurobiological treatment for cocaine addiction,” says Antonello Bonci, scientific director of the intramural research program at the NIH’s National Institute on Drug Abuse and one of the authors of the study. “We have nothing so far to help treat cocaine addicts besides cognitive therapy and psychological support.”

Addiction appears to establish signaling patterns in the brain that compel people to compulsively seek the drug, and applying TMS could disrupt the pattern, just as noise can interfere with a radio signal.In addicts, areas of the prefrontal cortex that would normally be alight with activity often go dark in the absence of the drug, a state researchers call “hypoactive.” And dulling of brain areas that are crucial to decision-making could be what drives addicts to continue using the drug even when the consequences are ruinous.

Bonci says brain-scanning studies indicate that the effects on brain activity appear to ripple outward, like water pouring over an umbrella. “It’s a network effect,” he says. “It creates a beautiful widespread effect.”

For Stefano, the Italian addict, who spoke to MIT Technology Review by telephone, the results have already been life-changing. “It’s a new sensation for me—to have money in my pocket and not have to go out and buy cocaine,” he says. “It’s incredible. People are noticing I have changed.”